Book: Wildcat and the Hunn Family

Katherine Hunn Karsner (1899 – 1993), daughter of Ezekiel Hunn, III and sister of W. Roland Hunn, wrote a book about Wildcat and the Hunn family. It was edited by Alan Jones and Ben Keller in 1999 and computerized by Alan. You can access it here:

Wildcat and the Hunn Family

The land along the St. Jones River that became Wildcat was purchased by brothers Jonathan (b. 1729) and Ryneer Hunn (b. 1731) on November 12, 1761. Jonathan and Ryneer were grand sons of early Quaker settler Priscilla Kitchen Hunn Bowers. The boys married sisters Ann and Mary Willson.

They decided that the land at the mouth of Tidbury creek where it empties into the St. Jones would be an excellent site for a saw mill, damned it off, and started in business. Unfortunately, Ryneer died in 1762.

The sixth child of Jonathan and Ann was Jonathan II (b. 22 Jan. 1764) who later married Patience, the daughter of Daniel and Ann Mifflin. “Jonathan II, primarily a farmer, was an astute businessman and owned as many as three shallops, a kind of sailing cargo vessel. These boats were captained and crewed by Negroes and are supposed to have smuggled slaves to freedom.” [Quote from Wildcat and the Hunn Family, by Katherine Hunn Karsner, p. 28.]

Jonathan II and Patience had only one child, Walker Mifflin Hunn, who died at age three. Jonathan I owned slaves and Jonathan II, if he had any, freed them according to the records of the Duck Creek Meeting.

Jonathan II and his brothers Nathanial and Ezekiel inherited Wildcat and the mill site from their father Jonathan I. Ezekiel I had six children by his marriage to Tabitha Newel, the last of whom was Ezekiel II (b. 1 Mar. 1774). He also had three children by his marriage to Hanna Alston; the middle one was John Hunn (b. 25 Jun. 1818) who became the well-known abolitionist who was the conductor of the mid-Delaware section of the Underground Railroad. John married Mary Swallow. Their son, John, Jr. became Governor of Delaware in 1901.

It is unclear when the house at Wildcat was built but it is certain that it was added to over the years.

Ezekiel II married Lydia Jones Sharpless on 30 June, 1836. They lived in Philadelphia but spent most summers at Wildcat. Lydia added bay windows to the house and beautiful gardens to the grounds.

Ezekiel Hunn III, often referred to as Ezekiel Hunn, Jr., was born on 20 June 1841. He married Anna Jenkins, 15 years his junior, who grew up on a neighboring farm. He was a lawyer in Philadelphia. The family spent most summers at Wildcat with Ezekiel commuting by train between Philadelphia and Wildcat. Their child William Roland Hunn (always called “Roland”) purchased Wildcat at a sheriff’s sale after the death of Ezekiel III in 1926. The deed was in a mess even though Ezekiel was a lawyer. Roland wrapped up all the pieces. He and his and his wife Margaret Barnard Cooper Hunn became sole owners.

After World War II, Roland and Margaret’s youngest child, Alan and his wife Shirley, were given Wildcat after he returned from the War having spent many months in a German prisoner of war camp. Alan and Shirley raised their three children, Laurence, Alana, and Douglas, at Wildcat. After Alan’s death in 1987, Shirley continued to live at Wildcat until 2004 when she sold the house and the surrounding property to Kent County. 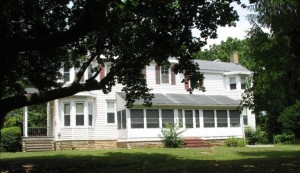 In January 2012, the University put a new roof on the house to save it from deterioration. 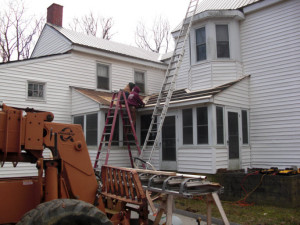 In the spring of 2016, Delaware State University requested that they be released from the lease. This was granted and Kent County became the sole owner and manager of Wildcat.

In early July, Kent County hired a contractor to demolish the garage. A study in 2010 found that the garage was in the process of collapsing and if it did, it could damage the house.

A historical site near Camden, Delaware